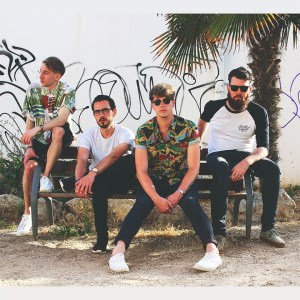 Having cut their teeth supporting indie buzz bands such as Peace and Palma Violets in their home-town of Stoke, it was obvious almost from the outset that Delamere were a band destined for a bright future. Their first singles earned crucial early airplay from the likes of Amazing Radio and BBC Introducing in Stoke, with later releases ‘Bright Young Things’ and ‘Heart’ being aired on National Television on Channel 4’s Made in Chelsea and Sky Sports’ Soccer AM respectively, expanding their regional success to a national scale.

Now, after months of waiting, the band are set to release their self-titled debut album, a record both unequivocally Delamere, while at the same time being quite unlike anything the band have released before, building on the characteristic anthemics synonymous with the band while exceeding any expectations. As a result, Delamere is the sound of a band on the brink of a breakthrough, pushing themselves to their limits.

As if with something to prove, the album’s lead single ‘Kill It’ was a euphoric statement of intent from the band, one which was met with rapturous response from fans and critics alike, and whose strength has only been bolstered by second track ‘Black & White Space’. Premiered by Line of Best Fit who praised its “twinkling guitars, perfect percussion and velvety vocal”, it’s the perfect introduction to the band’s aesthetic.

Currently on their third UK tour, the band will launch Delamere at a special hometown release party at All Saints Church, Leek before taking in venues the length and breadth of the country.James Fitchford (guitar/vox/keys) had this to say of the show:

“We’re all really looking forward to the launch show; we’re treating it as probably the most important gig we’ve ever played, just for what it signifies. Secondly it’s in our hometown, in an absolutely amazing location. We wanted to play somewhere special and this ticks all the boxes, All Saints church is not only massive, but it also looks great inside.”