[LISTEN] LOZ KEYSTONE - HOW IS IT [IAI PREMIERE]

Posted by Alexa Wilde on May 12, 2017
Fronting an appreciation of electro-pop and alternative music, Loz KeyStone puts a different face on the term 'bedroom producer' all together. Embracing a laid-back approach of Mac DeMarco and a rich taste in minimal electro-beats, styling HONNE as one of these influences, his new new single/video 'How Is It' is the latest in his works.

After the release of the organ-driven debut single ‘Livid’, Loz KeyStone is due to unveil the video for his upcoming album’s second release, ‘How Is It’, with audio out now on SoundCloud. KeyStone self-shot the video at a boxing night in Clapham on his father’s old mini DV camera, the time and place where his older brother also fought and won his first fight - a sense of family symbolism. 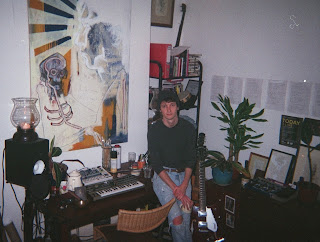 The subtle 80s drum loops on ‘How Is It’ vibe over the vintage light-leaking effects in the video, which intersperse between shots of the ring. The DIY style of the video suits KeyStone’s bedroom sound on the track, jazzy organ melodies backing a laid-back, groaning vocal delivery. There’s an undoubtedly sexual sense to this cut, a theme which the writer explores with regards to the after-math of his father’s death in the summer of 2014. Get watching and streaming right now.

Watch the video for 'How Is It' below