Posted by Chris Graham on January 10, 2018
BBC Radio 1/BBC Introducing Radio DJ, presenter and all-around music connoisseur Abbie Mccarthy has been spinning, curating new music talent on airwaves and venues for some time now and has helped kick-start many careers of exciting artists.

Her club night in London, Good Karma Club is a hub for new music fans, where the sole purpose of the night is to celebrate new sounds and emerging musicians. Each month Abbie picks 3 brand new & exciting artists to play, all acts she is tipping for big things and if that isn't amazing enough, it's completely free too! 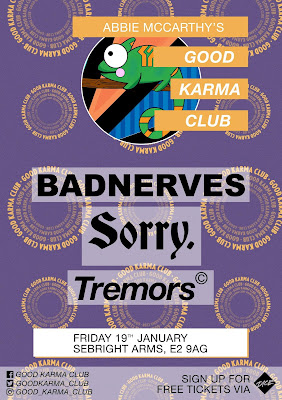 Previous acts that have played for GKC early in their careers include; The Amazons, Bad Sounds, Pale Waves, Will Joseph Cook & The Sherlocks, who are all killing it at the moment. GKC takes place every Thursday of every month at the Sebright Arms in London.

Later this month the night celebrates it's 2nd birthday with Bad Nerves, Sorry & Tremors all performing Friday 19th January at Sebright Arms. Get your tickets over on DICE.

Make sure you come down to the next!