Posted by George King on October 04, 2019
THREE excellent acts will perform at a charity concert this evening in memory of a passionate music fan who sadly took his own life.

The thought-provoking bash, which is taking place at Three Wise Monkeys in Colchester, is the Sesh For Luke Charity’s third show in as many years.

The organisation was set up in memory of Luke Evans - who passed away back in 2017 - by friends Tom Wade and Sam Ward, and his brother Ryan.

Each year the charity hosts an annual music concert to raise money for mental health charities Papyrus and The Samaritans.


To date, the Sesh For Luke Charity has donated a whopping £5,000 to the pair of life-changing organisations.

The communal, music gatherings are also used to further the discussion around mental health and to pay tribute to Luke, who has been described as being ‘‘kind natured, talented and charismatic.’’

This evening’s gig takes place from 7pm at popular venue and bar Three Wise Monkeys and will conclude at 1am. 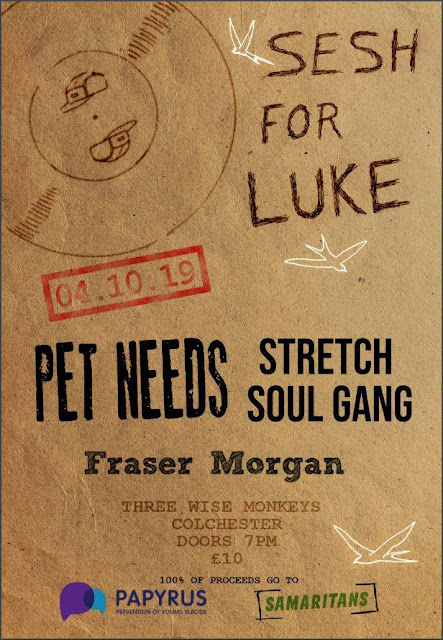 Tickets for the show cost £10 and can be purchased from https://tinyurl.com/yyn8lh9m.
100% of the proceeds will go towards Papyrus and The Samaritans.

For more information about the Sesh For Luke Charity visit www.facebook.com/SeshForLuke/