Posted by Richard Maver on June 21, 2017
Following its launch last year, Sunfall returns for round two this year. Brought to you by the teams behind London nightspots XOYO, The Nest and Phonox as well as the creative spirits behind Outlook and Dimensions festivals (both based in Croatia), this is a summer not to be missed. Differing from other day festivals, Sunfall is a party of two halves - with the main day event happening in Brockwell Park on Saturday 12th August. Then complimentarily, you can continue into the night at one of many late night club sessions with some of the UK and the world's biggest underground names.

Sunfall is not your ordinary festival. It is a festival of spirit, of community, and of the city. Underlying the festival is a music policy reflecting urban culture, and musical progression, spread across many genres including jazz, house, electronica, hip hop, dub, soul, techno and disco.

After its triumphant inaugural outing, Sunfall brings this summer a host of huge acts including Chicago legend Larry Heard (aka Mr Fingers), the unstoppable Motor City Drum Ensemble, a live show from Romare, as well as the expanding popularity of The Black Madonna. Other acts across the day event include huge acts like Ben UFO, Floating Points, and Theo Parrish. Check out the full event line-up below. 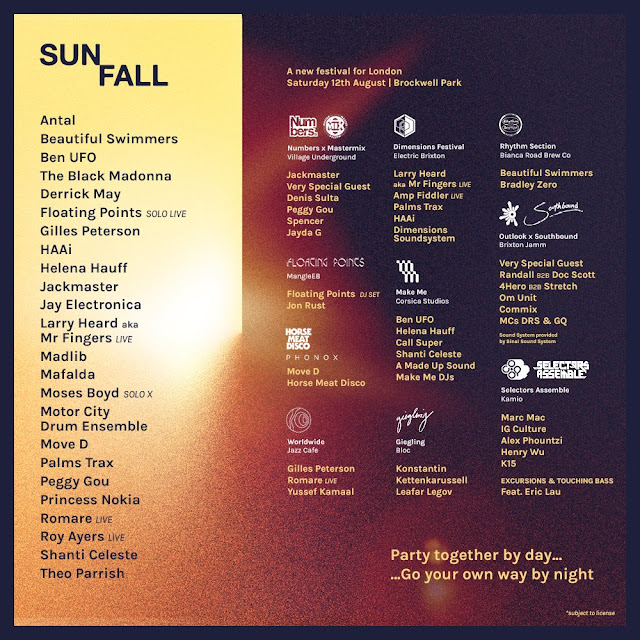 Starting at only £50 plus booking fee, this event evolves into a must-do event. Tickets are available from Resident Advisor [HERE]

Make sure to check out the [WEBSITE] too for any information.

Check out some reviews of last year's festival.

"The organisers made a clear pact to offer better sound... and the impact was immeasurable" - Thump

"You really were spoilt for choice in that respect, with parties" - Stamp The Wax

"Sunfall positions itself as the muso's choice, and does pretty much everything right on its first outing" - The Guardian

I hope to see you all there!