Posted by Alexa Wilde on September 01, 2017
A group that pushes genre boundaries, combining sounds of folk, indie-rock, blues and jazz, Low Chimes' latest effort, 'Sulphur Silk' follows previous Low Chimes singles ‘Sleepwalking’ and ‘Blood Orange’. The band's sound is intricate, transcending and groove-laden. Low Chimes have already picked up extensive BBC 6 Music love from the likes of Marc Riley and Lauren Laverne, leading to a recent live session on Marc Riley's 6 Music show. The band have also begun to appear at some of the best curated UK festivals: Glastonbury this year and previously Green Man, Kendal Calling and Festival No. 6. 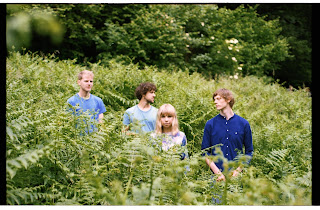 Inspired by her travels and love of nature, lead vocalist Marianne Parrish’s adventurous lyrics interweave natural images with narratives of new beginnings and letting go of the past, but often serve as metaphors for darker themes of solitude, anxiety and escapism. Low Chimes’ latest single ‘Sulphur Silk’ channels Marianne’s poignant lyrical themes though a progressive arrangement of darkened guitar lines, drum rolls and a synthetic backdrop of pad swells that later quickens in tempo and builds in energy. A chorus of rising vocal harmonies drives the song towards a climactic instrumental conclusion that brings the band's core live aesthetic to the fore.

Explaining the song's lyrical themes, Marianne says "Seeking respite at the end of a relationship I’d gone away to Sweden, but everything I saw and heard seemed to reflect the way I was feeling back at me. ’Sulphur Silk’ recalls a time when I was floating in a Swedish lake; I closed my eyes and allowed my ears to sink below the surface, and with my senses dulled it felt like the lake was cleansing me and cloaking me from the real world”.

‘Sulphur Silk’ is taken from Low Chimes' debut album 'Illumine', which is due for release on 6th October via their own label, Bellow Records.

3rd Sept - Off The Tracks