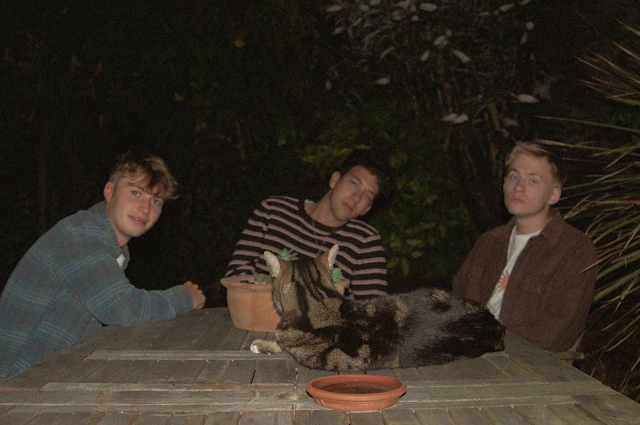 Distilling elements of indie rock music with lo-fi tinged goodness, american blondes are a new band to keep your eye on. It's All Indie spoke to the group's frontman Jake Hammarton.

Hello Jake, can you please introduce the rest of the band?

We have Jack Ames on the drums, Ben Porteous-Butler on the keys, Harry Mitchell on bass and myself Jake Hammarton on guitar and vocals.

Two singles out so far, the debut shoegaze-esque single 'China_Clay' & the lo-fi indie tune 'Sunday'. How does the creative process work for the group?

Pretty much I come up with an idea for a song whether its a chord progression or a vocal melody, and i’ll send the boys some different ideas via voice memos, and we'll all give our individual touch to it for when we next meet up for a rehearsal, and then we just jam it out and see what things work well together. We’re always on the same page when it comes to ideas, which makes things a lot easier.

Why did you choose the name american blondes?

Jack and I were on a retreat in Bermuda and we found ourselves after a heavy night, in a hotel room with a few members of the BRFC (Burmese Rush Fan Club). They tried to sacrifice Jack to Giddy Lee using nothing but a wooden spoon and a copy of the 1989 Rush record ‘Presto’. But nonetheless we escaped and ran to police station, when we returned to the hotel to show the officer where Jack nearly died it was just an empty room with a post-it note in the centre of the room that read, 'american blondes' all lower case.

Most of the band are students, tell us how studying at different universities has impacted the band?

Actually we’re all quite all over the place when it comes to what we study. I’m based in Brighton studying Music Business at BIMM, Ben is at ICMP in London studying Songwriting, Jack is at NUA in Norwich doing Graphic Design, and Harry is in Colchester studying Medical Science. So we’re all quite spread out but at the same time we make things work, being based in different cities broadens our sound because each place has a different music scene going on.

If you could tour with any band in the world, who would you love to support?

We would love to go on tour with Twin Peaks, they seem way too cool for us though.

Tell us one fun fact about each member of the group…

Jack has never actually smiled once in his 21 years on this Earth. Ben puts 8 sugars in his tea. Harry can count to 150 in one breath. And I formerly held the world record for the fasted lap time on the track Yoshi Falls on Mario Kart Wii.

Finally, what's next for american blondes?

We have a gig coming up on the 10th November at the Bedfords Crypt in Norwich for Oxjam Festival, and after that we’ll probably just carry on writing songs, recording demos and generally being happy people. (Apart from Jack)