Posted by Chris Graham on November 14, 2018
Off the back of a sold out headlining show at London’s Sebright Arms on Halloween, indie-rockers Bridges have dropped a timely new video for the aptly named single ‘Ghouls’ (out 2nd Nov). The beautifully shot performance video comes courtesy of by Sam Kinsella and Sam’s House Films (of the band Monarks, who has previously made videos for bands like Twin Atlantic), and shows off the Bridges’ new fuller line up. Somewhat fortuitous timing, front-man Ethan explains:


“Bit of a coincidence really, with the title of the track being ‘Ghouls’ we thought why not drop it on Halloween?  Plus it gave us the chance to do a release show with costumes, and that’s always fun!”


After a recent line up change, the now 5-piece Bridges look forward to a busy period as they announce the release of their new EP ‘On And On Like This’ (physically out 19th October on Rose Coloured Records) ahead of a mini tour across the UK throughout November.

The track sees the rejuvenated band on top form - known for their transatlantic, guitar driven sound and songs that are raw and heartfelt, ‘Ghouls’ boasts more of a half time approach as the song builds to an epic final chorus. Ethan explains:
“For me the song is nostalgic and probably my favourite on the EP. It’s tied to people moving on before you do and the difficulties that can create. ‘Maybe I’m not your ghoul, to pass straight through’. Things change, but everything works out in time - with our new line up now complete we are starting to feel that.” 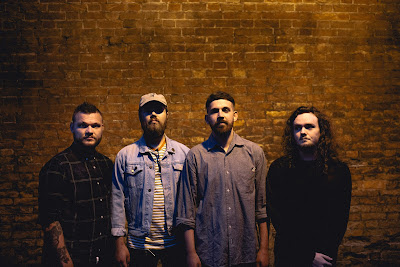 Previous single (and first from EP) ‘Maths, Science & English’ garnered support from Farout Magazine, Bristol In Stereo and various Hypem listed blogs, and their recent shows include a slot at Underground Festival - next up is Boileroom in Guildford. Their brand of alt rock has turned heads across the board, with previous tracks ‘BFF’ and ‘Reverie’ being championed by platforms such as BBC Introducing, Amazing Radio, Clash, Artrocker and Gigwise. Excelling on the road, they have already supported  George Ezra, We Were Promised Jetpacks, All Tvvins and The Coronas, have played numerous sold out headlining shows this year as well as a slot at Wilderness Festival in August and have previously played slots at Glastonbury and Leeds festivals.


Bridges have announced these UK shows, with more to follow – check out their website for ticket details here with full listings below:

‘Ghouls’ is out on all digital platforms 2nd November 2018 |