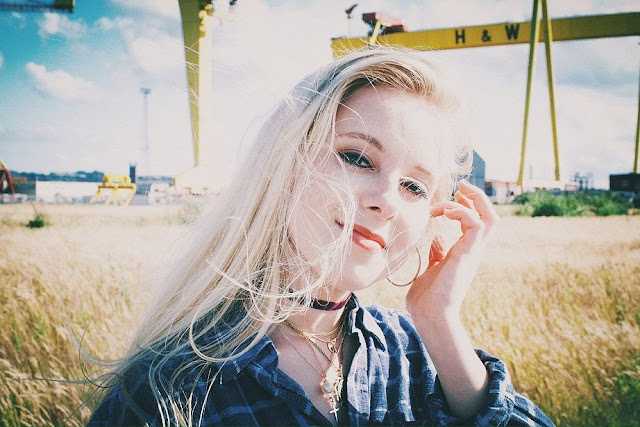 Northern Irish alt-pop singer-songwriter Rebekah Fitch recently soared onto our radar with her track Need To Feel that has a distinctly emotive multidimensional appeal. The song would stand out on its own, with her blissful tones gracing alternative pop production that take embraces cinematic musical themes of the past while sharpening them up with contemporary production - but what makes this song truly shine is her lyrical message and the passion in which she delivers it. We caught up with her to gain further insight into this and to what set her on this musical journey.

Hey Rebekah, thanks for taking the time to speak with us. To start with, how did you get into writing music?
I grew up surrounded by music, in school, and at home - it was always present whether I was learning an instrument, singing in a choir, playing in a band or whether it was echoing around the house. I used to write pieces of songs even from primary school age. It gradually became something I did more and more of as I got into my later teens, but it’s only in the past couple of years that I've been consciously working on developing it - developing my ideas and my creativity. Songwriting was always something I dreamt about having a career in, but felt very distant - I didn't know anyone growing up who was a full-time musician really. It gradually became more and more a part of who I was until I couldn't really ignore it. I went on to study music at university and realised I couldn't really do anything else with my life.

Your music walks the line between a myriad of genres, in your own words how would you describe it?
I tend to describe it as alternative pop, it can be quite electronic and I love experimenting with different aspects of songwriting and production too. Strong melodies are so important in being able to make that human connection with other people. That’s what speaks to people first, so I love to focus on that and make sure the melody can stand on its own without all the production too. I guess my harmonies can be quite blues-influenced, but in the production, I always go back to my experimental electronic influences like Bjork, Massive Attack, David Bowie. I love music that is cinematic and powerful.

Having been born and raised in Belfast, do you feel that your Irish upbringing influences your music?
I’m not sure. I guess where I’m from is naturally a very musical culture, you can't escape it’s importance here, so it feels very natural. It has such a strong heritage of musicians, and hearing about their success was always quite electric, as you feel some sort of a connection. In terms of stylistic influences, I think it’s a different story. Having grown up in an age where the whole world is accessible, it really means there is no limit to your influences - you are constantly being educated in creativity from all over the world.

You can draw from so many different sources, which is amazing. You just performed at the Windmill in Brixton, how was that?
It was amazing, thank you! It felt incredible to be able to perform somewhere you're not from and have so many people come to the gig. And the venue was class! Really hoping to be back soon.

You have some dates lined up for November back in Ireland though, does it feel more exciting to play somewhere new or somewhere closer to home?
It’s always great to be playing in new places, sharing your music with new audiences and connecting with lots of new people. I love that, and then they can be a part of your journey as it keeps growing. Home shows are amazing in a different way, as you know there will be a great crowd of really supportive people who have been behind you for a long time. They’re also very special.

We love "Need To Feel", can you share an insight into the motivations behind it both musically and lyrically?
Thank you! I write a lot of my songs about my experiences with mental health. Need To Feel, for me, is about feeling isolated and detached - stuck in this place of loneliness and frustration, and ultimately boredom too. Stuck in your own head, and feeling very low. It’s not always that you’re feeling sad, sometimes you just feel nothing for long periods of time, and that can be quite terrifying. You're just existing. It’s about living in that limbo, a cycle that you can’t get out of, and struggling to open up to anyone about it - even those you're closest too. I wanted the production to be super punchy, so we made the drums and the bass line that carries the track the center of the production and very impactful, with other embellishments around it. So it really hits your heart. I think of my music very visually and spatially, so I imagine that all the parts are coming from different positions within the space that I’m in. I love focusing on the movement of the music as well, and that was very prominent in the pre-choruses for me, having that swelling effect.

What can we look forward to from you next?
I've just finished recording a new EP that will be out next year! Also working on improving my live show, along with incorporating the new tracks, so I’m hoping to be touring that next year too.