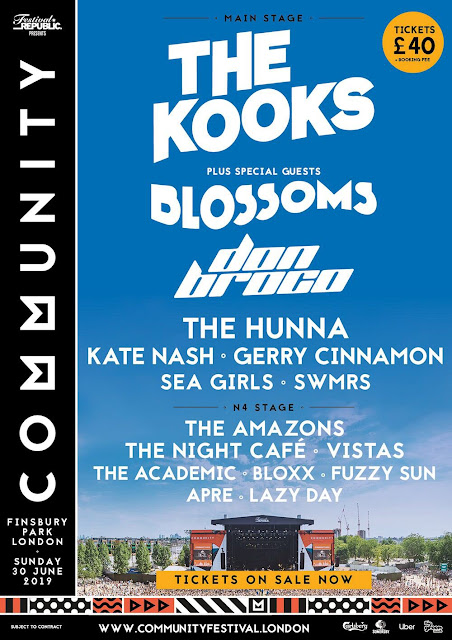 Community Festival returns to Finsbury Park this Sunday (30th June) with a massive line-up featuring headliners The Kooks and special guests Blossoms.
Two successful years have gone, and the popular festival continues to define a generation of indie fans by hosting an unmissable line-up of some of the biggest British bands following in the footsteps of Oasis, The Stone Roses and The Sex Pistols to play the iconic park.
“It’ll be 15 years since we first formed as a band next year, and I can’t think of any better way to celebrate than headlining our biggest show to date", says The Kooks' Luke Pritchard. "We can’t wait to have the biggest party of the summer.”
“We love a good, big, London outdoor show. What a line-up!", says Blossoms' Tom Ogden. "We had a blast playing with The Kooks in Europe a few years back, but this’ll be even better.”
Fans will get a special opportunity to see Kate Nash after her 2018 release 'Yesterday Was Forever' when she takes the stage with her impeccable presence.

The best place to catch bands on the rise, Community will once again be packed with exciting new music such as The Academic, Sea Girls and Fuzzy Sun. The Night Café continue their trajectory with their catchy sounds. Equally immersive are London-based Bloxx, who are entering new music with their captivating songs.

After storming the charts with debut album ‘100’, second album ‘Dare’ followed this with a fury of hooks, and The Hunna's appearance on Sunday is bound to elicit unrivalled scenes.

Headlined by Two Door Cinema Club, last year saw 37,500 music fans enjoy the hottest music shows of the summer. With even more memories set to be made in 2019, Community Festival is the go-to destination for a summer celebration of indie music.

Tickets for Community are on sale now for just £40
@communityLDN