[FRIDAY'S FINEST] with Turtle Tempo, Nexus Music Blog, IndieCentralMusic and It's All Indie

Posted by Fred Bambridge on December 06, 2019
We are back to host Fridays Finest this week earlier than scheduled, and once again it's chock full up of four of the best tracks that we've all been enjoying as of late. This week we've got four amazing tracks that are as new as you can get, so let's delve in and enjoy

The Assist - I Don't Care 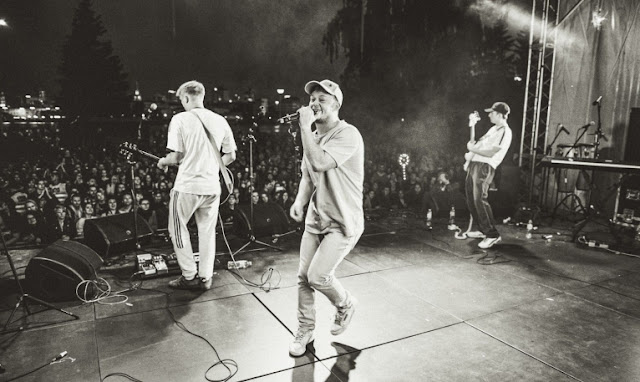 This new offering from Birmingham's finest rounds off an impressive year for the quintet, with the band being included in the 'Long List' for Glastonbury's Emerging Talents Competition and even playing their first international festival in Russia at the Ural Night Music Festival and even popping over the Channel to play a show in Paris with Black Honey.

With December upon us the band felt it right to release one of their finest pieces of work to date. "I Don't Care" is pure The Assist, bouncy guitars, tight instrumentation and vocals that after a couple of plays will make you sing it back at the top of your lungs. There's lots of optimism with the band growing into what they've become today, the confidence they have is unbelievable, but when you're creating tunes such as this why the heck not, they've got the ingredients to be absolutely massive and "I Don't Care" is just the beginning. So head on down and fall in love with one of the finest unsigned bands in the UK, no, the world!

Bright Orange - I Struggle To Communicate

Fresh from playing a show at The Garage in London self-titled ‘millennial-glam’ band Bright Orange Spectacle have dropped their second release in ‘I Struggle To Communicate’ the quartet really do have an aura about them like no other band.

It’s a tough gig sometimes for bands to stand out from their ‘indie’ counterparts but these guys definitely do, Bright Orange Spectacle combine 80s and modern influences to make what can only described as pure magic, all you can say is their future is looking extremely bright if they keep on releasing bops like this and their debut single ‘She Could Get Better’.

Lead singer Charlie Sinclair on their new single: “We live in a time where everyone has to be a social commentator. It’s not necessarily a bad thing but it leads to a certain amount of pressure for bands to make very grand political statements from day one. I kept sitting down to write that song and eventually this came out. It’s just a lot of honesty about my own lack of understanding towards our correct cultural climate. We live in a time where information is so readily available, yet I still feel like I know nothing. Things are bad, obviously things are bad, but that’s about all I know
and that’s fucking depressing. So ‘I Struggle To Communicate’ is just a reaction to my own ignorance and a personal call to arms for me to better facilitate myself with knowledge”.

Luna Rosa have released their new track Corrugated Steel today. With an emphasis on the country and inspired by everyday people, the track was recorded on the day that Boris Johnson came into power. The band say that they hope the record provides 'a little solace, a little escape'.

I feel that it does just that. Raw, purposeful and full of vibrancy, I get the feeling that those of us at Nexus won't be the only ones rating this so highly.

RAMES - Easy For You

Indie pop band RAMES released their debut single ‘Easy For You’ as the London band look set to make their mark on the music industry. The four-piece, who formed at the end of 2018, showcase a youthful and catchy style of jangly, melodic and guitar driven tunes.


Lead singer Alan Li and lead guitarist Old Zanetti formed the current band after disbanding former project The Recoupes and, added bassist Joseph Bedford and drummer Fin Dudley. With nods to The Cure and The Night Cafe, RAMES have culminated an expressing of their adolescence through an exercise of harsh vocals, jangly guitars and big choruses.

Having received BBC Introducing recognition early on with their two demos ‘Every time’ and ‘Talk’ the boys have already in their first year played major UK venues and have supported the likes of The Manatees and DECO; as well as performing shows for major national promoters in Sucker, JuiceBox Live and Scruff of the Neck. It’s still early days for RAMES, but the tunes speak for themselves and we’re incredibly excited to see what the future holds for this incredibly exciting four-piece.